Infiniti G35 vs. Nissan 350Z: Which is the Better Vehicle?

If you’re in the market for a sporty car, you can’t go wrong with an Infiniti G35 or a Nissan 350Z. Both vehicles offer tremendous performance at a reasonable price point, luxury features, and a stylish exterior and interior. There are some subtle differences between the two vehicles, and choosing the right one really depends on the niche you’re trying to fill.

Hopefully, this comparison of the G35 vs. the 350Z can help you make a more informed decision based on your specific needs and preferences.

If you regularly commute with more than one other person, the decision is essentially already made for you. The G35 is the clear choice for anyone with children, as it has a sedan variant that seats four people. On the other hand, the 350Z is a pure sports car hatchback and the ultimate track car, seating just the driver and one other passenger.

If you’re looking for versatility, the G35 also has significantly more trunk space, making it more of an everyday commuter than the zippy 350Z. If you need a vehicle with space for people or for weekend camping trips, the G35 is the clear winner.

Both vehicles offer an enjoyable driving experience, but there are some subtle nuances that differentiate the Nissan 350Z and the Infiniti G35. The G35 tends to feel more stable and secure, especially when traveling at high speeds.

The G35 has a bit of extra weight over the 350Z, and it also has a wider wheelbase. Both of these factors definitely give the G35 that rigid solidity and smoothness that can make it difficult to determine how fast you’re going without glancing at the speedometer. The G35 also boasts a more comfortable suspension setup that keeps bumps and jolts at a minimum.

While the 350Z still provides a solid ride, it has more of a traditional sports car feel than a sporty coupe. The 350Z’s lighter weight gives it a sharper and more focused linear response. You can really zip around those turns without slowing down significantly, and the brakes stop on a dime.

The 350Z is a sports car through and through, providing incredible response and reflexes, albeit slightly less stable and refined than the G35. If hitting the track is your thing, the 350Z sports car will not disappoint. When comparing the G35 vs. the 350Z, it’s really a matter of preference, as both excel at what they do. 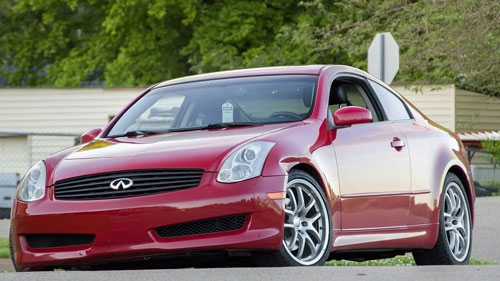 The Infiniti G35 exudes class. Leather interior, smooth curves, and stacked dual headlamps and turn signals give the G35 a sophisticated look that is at home on the track or commuting to and from work.

The G35 may be more of a grownup’s car, as it has slightly more elegant styling and high-end features, but that doesn’t mean this car doesn’t also have its young and modern side. The G35 seamlessly combines luxury and sporty sensibilities without losing points on either side.

When you compare the G35 vs. the 350Z, the 350Z is a bolder and edgier choice that really stands out on the road or on the track. The 350Z has tighter proportions and weighs 200 pounds less than the G35. The widely flared fenders and hatchback design ensure that there are no misgivings about what you’re driving — this is a sports car.

Although it may not be as practical as the G35, it certainly makes up for it with a modern style. For some, the 350Z may be more suited as a weekend getaway car than a full-time commuter, but the 350Z is still more versatile than many other traditional sports cars and can still be relied on as your daily driver.

Where you plan to use your vehicle most is going to be a major deciding factor as you consider the G35 vs. the 350Z. While both vehicles can provide a fantastic experience in virtually any setting, they both also have their own niches.

The G35 is much more at home on long excursions, wide turns through mountain roads, and long-distance trips. The 350Z is a superb track car, providing the snappy response you would expect from a high-octane sports machine. However, the G35 is no slouch on the track either, providing a deceptively smooth ride with responsive steering.

Your height may be a deciding factor as you compare the G35 vs. the 350Z. As stated previously, the G35 provides much more seating and trunk space, but you may also need to consider your comfort as the driver. Someone who is 6 feet or taller may find that they have to really squeeze and fold just to make the 350Z drivable.

Additionally, tall passengers are going to have a tough time even getting into the Z, let alone riding in comfort. The G, on the other hand, offers far more space. If you are large in stature or plan on going on long excursions, the G35 is a much more sensible choice.

While the difference is negligible, the 350Z does get slightly more mileage to the gallon. The automatic G35 is rated at 19 mpg in the city and 26 mpg on the highway, whereas the 350Z comes in at 20 and 26 mpg, respectively.

Because the two vehicles are so close, this is not usually a major factor to consider when comparing the G35 vs. the 350Z. On the other hand, even a tiny number adds up over time, so if you’re really trying to make the most economical choice in the long term, the 350Z is the winner.

The monetary value between the Nissan 350Z and Infiniti G35 is surprisingly similar. While it is definitely going to vary depending on the features you choose, the year the car was made, and a myriad of other factors, on average, the G35 is only $4,000-$6,000.

When you consider the numerous upgrades and additional features you get with the G35, the Infiniti seems like a better buy when pitting the G35 vs. the 350Z. However, it really comes down to what you are looking for in a car. Plenty of drivers would be happy to be spending much more for the 350Z simply because they like it better.

As you can probably tell by now, both cars offer exceptional performance and features. Both cars are versatile, but they do have their specific strengths and weaknesses as well. At the end of the day, it really comes down to your personal needs.

The Infiniti G35 is more of a daily driver, offering sports sensibilities in a refined, elegant package. The 350Z is a more direct and unapologetic track car that does its job brilliantly. You can’t go wrong when choosing between the G35 and 350Z, so go ahead and take them both for a test drive to find the one that feels right to you.

And while you’re at it, check out the full selection of G35 parts and 350Z parts at Enjuku Racing, and customize your ride to perfection!